Hereford Inlet has been a beacon of safety and assurance to mariners since the 17th century. It was first used by whalers to haul in and butcher their catches. As the use of the Inlet, and coastal shipping continued to increase over the years, so did the number of shipwrecks. The Hereford Inlet Lighthouse was constructed to mark the mouth of the Inlet, which would help prevent shipwrecks.

The Hereford Inlet Lighthouse stands on the south side of the Hereford Inlet, which leads from the Atlantic Ocean to the Intra-Costal Waterway linking Maine to Florida. This wood frame, residential style Lighthouse was first lit on May 1th, 1874 and was designed by the Lighthouse Boards Chief Draftsman, Paul J. Pelz, who later went on to gain recognition as the designer of the Library of Congress in Washington, D.C.

Hereford Inlet Lighthouse stood firm against the onslaught of the winds, rains, and tides for 40 years at its original location. A severe storm in August of 1913 significantly damaged the foundation, requiring it to be moved westward 150 feet to where it sits today. A historical marker was installed at the original location of Hereford Inlet Lighthouse on Anglesea Day – Friday, June 1st, 2018. Grants awarded by the New Jersey Historic Trust and the N.J. Department of Transportation have helped finance maintenance, repairs and upkeep over the years.

Today, it stands proud as a cherished landmark for residents and visitors of the community of North Wildwood. Its bright light stands at latitude 39 degrees and longitude 74 degrees, 47 minutes. The Hereford Inlet Lighthouse is approximately 49 ½ feet with the light elevation rising to 57 feet above sea level. On a clear night, the light is visible at a distance of 13 nautical miles.

Keepers of The Hereford Inlet Lighthouse

In 1964 a metal tower was built in the backyard of the Lighthouse, a rotating beacon was placed on top, and the light in the Lighthouse Tower was turned off.

Through the indefatigable efforts of Mayor Anthony Catanoso and his wife Phyllis the City of North Wildwood obtained a lease to the Lighthouse from the New Jersey Dept. of Environmental Protection in 1982. Immediately restoration efforts began, backed by donations, grants and the work of volunteers. The light from the metal tower was placed in the Lighthouse tower in 1986 and Hereford Inlet Lighthouse shined again, its original Fresnel lens being left on display on the lower level of the Lighthouse. Restoration projects have continued through the years. The United States Coast Guard continues to maintain the light as an active Aid to Navigation for mariners. 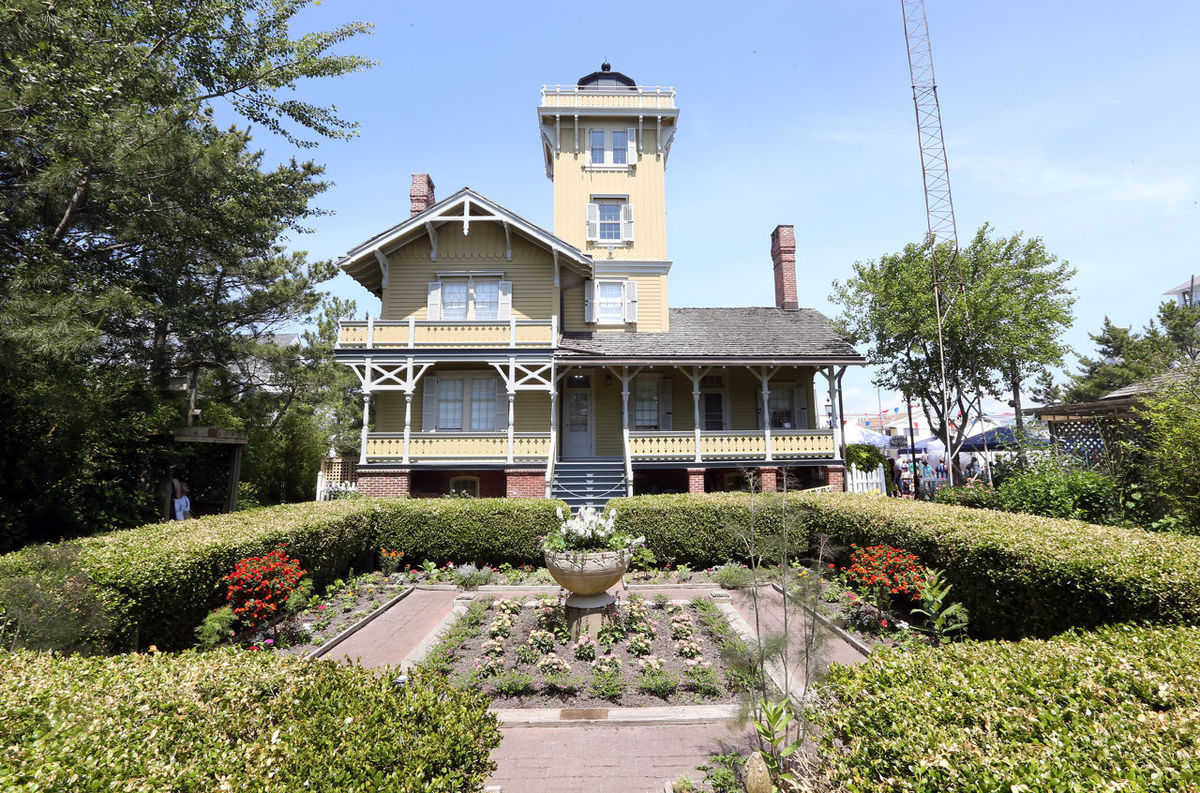